The best part of any season is the food. I can really appreciate Japanese food since it places a great emphasis on the ingredients of the season. Certain dishes are only to be eaten at certain times of year, since the flavor should only be enjoyed at its best. Eating it at any other time will do a disservice to the taste. Now that summer is finally in full swing, it’s the time for some amazing barbeque food. While I love the classic burgers and ribs at our cook outs, every once in a while I like to mix it up.

Nasu Dengaku is a good example of seasonal cooking. Dengaku refers to a type of dish, usually tofu, that is grilled and roasted over a fire, but it also refers to the ritual music and dance used to celebrate at shrines during festival. This dish is an integral part of summer celebration, so it makes a perfect dish to highlight at your next cook out. While you can make this dish with tofu, today I am sharing a variation of this dish with eggplant, or nasu. It’s a great addition to your barbeque, especially for vegetarians tired of the usual veggie burger! (just substitute vegetable broth instead)

I received a special request to share this recipe, so I really wanted to help people learn how to make it. Unfortunately for me I am currently living in a small apartment. That means to access to a grill for me for fire code restrictions. But I really wanted to share this dish with you, and I realized that I’m probably not the only one out there who doesn’t have a grill, so I’ve modified this recipe to use an oven and broiler instead. It doesn’t get the characteristic smokey flavor of a grill this way, but it’s still good, I promise! If you do have access to a grill, then you should definitely use it! Follow the preparation exactly and just modify the cooking time appropriately until the eggplant is tender!

This dish is traditionally made with Japanese eggplants, which are much smaller, softer, and moister than the larger eggplants found in American grocery stores. Unfortunately I can never find the small ones near me, so I have no choice but to you the local ones. If you do come across Japanese eggplants, you should definitely use them, but if you can only find the larger ones, just pick the smallest ones you can get.

– Preheat oven to 350 degrees. If using a grill, light the grill instead.

– Slice eggplant lengthwise down the middle. Start slicing diagonal lines down the length of the eggplant to create a deep criss cross pattern within the eggplant, not completely cut through and puncture the skin. (it’s ok of it does cut through the bottom, it will just have a harder time keeping it’s shape while grilling) 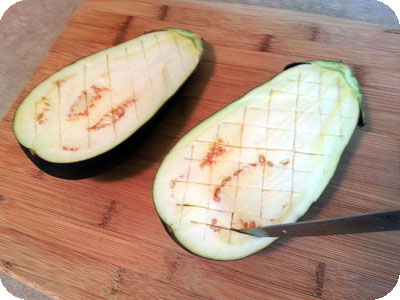 – Use a brush or spoon to coat the eggplant liberally with oil. Place eggplant on a pan and bake in the oven for 30 to 45 minutes, until the eggplant is completely tender when punctured with a fork.

– While the eggplant is cooking, prepare the sauce. In a small saucepan, add dashi, mirin, sake and sugar and bring to a gentle boil over medium high heat. 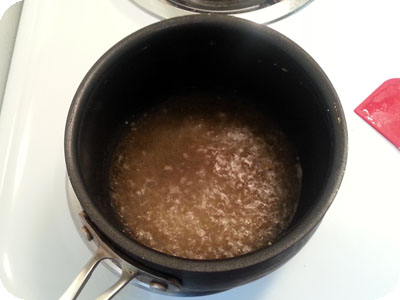 – Add the miso, and stir briskly with a whisk or spoon. Once the miso has been blended into the sauce, remove from heat and let cool. 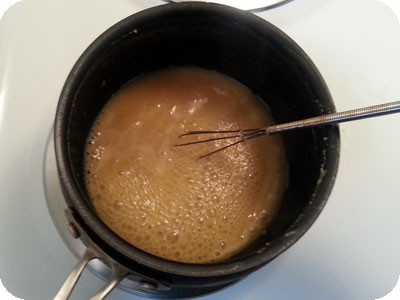 – Once the eggplant has been cooked, remove from oven. The eggplant should have a nice roasted appearance, with the cuts being accented with deep ridges. Turn your oven on to the broiler setting, then prepare the eggplant for roasting. 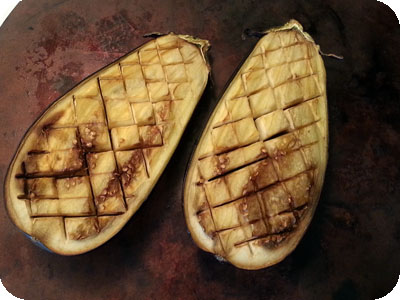 – Carefully pour the sauce over the eggplant. Brush with a spoon to spread the sauce evenly over the surface. 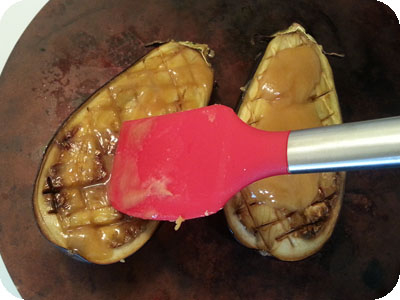 – Sprinkle the top with sesame seeds.

– Once the broiler is hot, put the eggplant back into the oven. Watch the eggplant carefully because the sugar in the sauce can burn fast! The sauce will quickly start to bubble under the heat, and within a few minutes it will start to caramelize. Remove from heat when it starts to blacken.

– The eggplant should look like it came off a grill when finished! If you are lucky enough to have a grill, they should be beautifully charred and crisp. 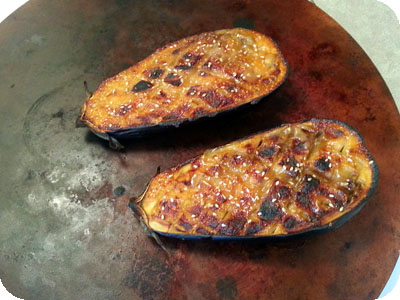