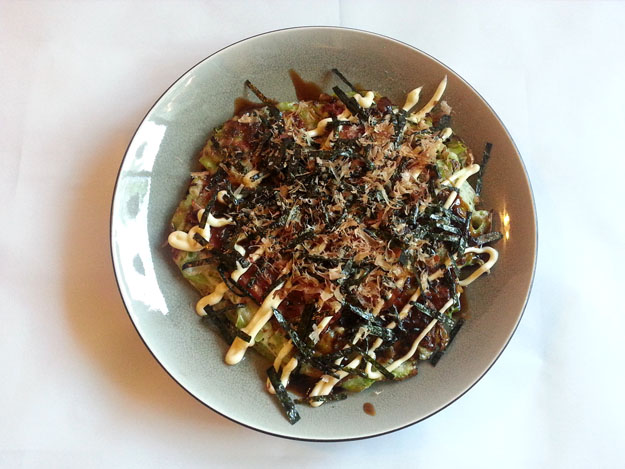 Okonomiyaki translates to “grilled as you like it” in Japanese. Basically, it’s a savory pancake with a variety of ingredients, and given the way it’s presented as a circular food with a variety of toppings, it’s become known as a Japanese pizza abroad. But it’s not really a pizza, because the texture is all wrong, and it’s not really a pancake, because it’s savory, but whatever you want to call it, its delicious, and not just because of the bacon.

It’s said that okonomiyaki was invented in Osaka, although there are varieties, another popular one being Hiroshima’s with yakisoba and a fried egg on top. However you like it, it’s a very popular grilled street food.

To make an “authentic” okonomiyaki, it does require some very Japanese ingredients. Some are common, some are not.  For example, nagaimo: 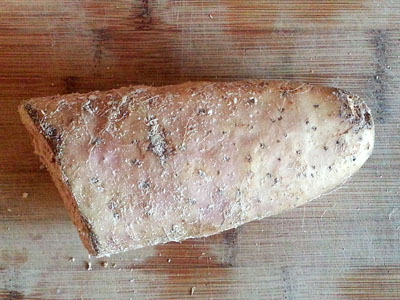 It’s a type of potato that is very sticky which creates a wonderfully springy texture when cooked, but it’s not a very common ingredient. A regular potato will do, but alas, it won’t have the same texture.

Another strange ingredient is tenkasu. Sounds very Japanese, but it’s actually easy to get. Basically it’s just the little bits of batter leftover at the bottom of the pot when you fry tempura… but if you don’t make tempura, you might not have leftover batter. I sometimes use other batter, like when I make fried chicken, or you can even take some of your okonomiyaki batter and fry them in the pan beforehand!

For any of these ingredients, feel free to substitute them if they aren’t available because remember, it means, grilled as you like, so you can put anything you want on it! Feel like cheese and tomatoes? Or maybe you want to add carrots and bell peppers and make it vegetarian? Go for it! It’s a great way to use up scraps in your pantry.

– Start by grating the nagaimo until you have 1/2 a cup. If you’ve never used it before, you might be surprised at how very viscous the nagaimo will be when grated. It’s weird, but oh so yummy when cooked! 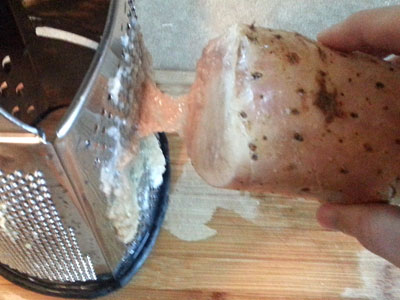 – In a large bowl, whisk together the nagaimo, flour, dashi and egg until blended. 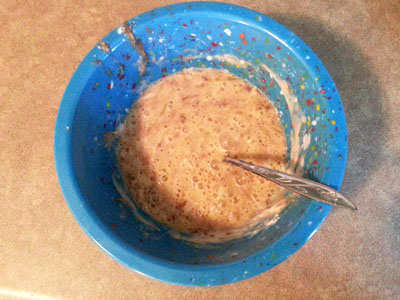 – Add the cabbage, green onions and tenkasu and mix until just blended. Don’t over mix because we don’t want the gluten in the flour to develop! 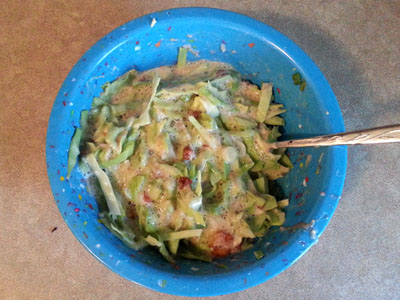 – Heat a medium pan over medium high heat and drizzle a little oil on the bottom. Add half the okonomiyaki mixture to the pan, then lay two pieces of bacon on top. Cover the pan with a tight fitting lid and cook for 6 minutes. 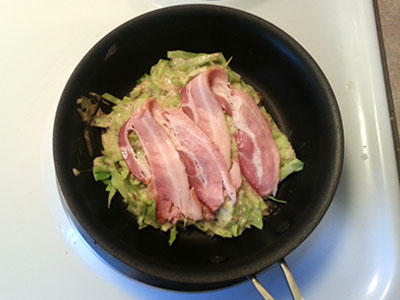 – Carefully flip over the okonomiyaki and cook uncovered for another 3 to 4 minutes until well browned. 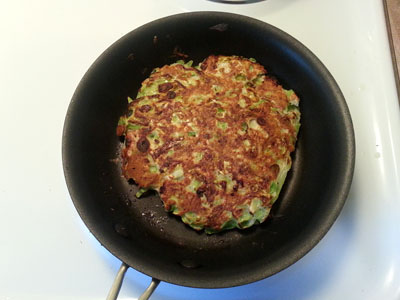 – Flip the okonomiyaki over onto a plate with the bacon side up. Drizzle with the sweetened tonkatsu sauce, mayonnaise, shredded nori, and bonito flakes. Serve immediately.